“This operating budget devotes record spending to MCPS,” said Leggett. “As a teacher, a grandparent with kids in our public schools and one for whom education was the ticket out of abject poverty, there is nothing more important than a good, quality education. That is why this operating budget provides an unprecedented County contribution of $1.5 billion for MCPS, 99.3 percent of the Board of Education’s request and $26 million over the State-required Maintenance of Effort level. I am adding at least $11 million in the existing MCPS fund balance to this total to raise the increase to $37 million. For Montgomery College, I am recommending a County contribution of $110.6 million, an 11 percent increase over last year and $11 million over Maintenance of Effort.”

“My commitment to prudent fiscal policies has restored the County’s economic health, allowing us to focus current available revenue on the priorities that are so essential to the needs of our growing community,” said Leggett. “My recommended budget increases resources for business growth and job creation, public safety, health and human services, libraries and other services that are so important to maintaining our strength and further enhancing our future quality of life.”

Holding the line on property taxes at the Charter limit with a drop in the property tax rate from $1.01 per $100 of assessed value to 99.6 cents so that the average homeowner will pay $17 less this year;

A property tax credit of $692 for each owner-occupied residence to limit the burden on homeowners;

Reductions in all County taxes, as a share of personal income, from an average of 4.41 percent in FY07 to a projected 4.0 percent in FY15 – a 10 percent decrease;

Full funding of the County’s Retiree Health Benefits at $105.1 million;

A 5.2 percent increase in tax-supported funding for the Maryland-National Capital Park and Planning Commission;

County financial reserves at the policy level of $379.9 million, the highest in the County’s history;

PAYGO in the Capital Improvements Program at 10 percent of current revenue to match bond funding in the capital budget, consistent with fiscal policy; 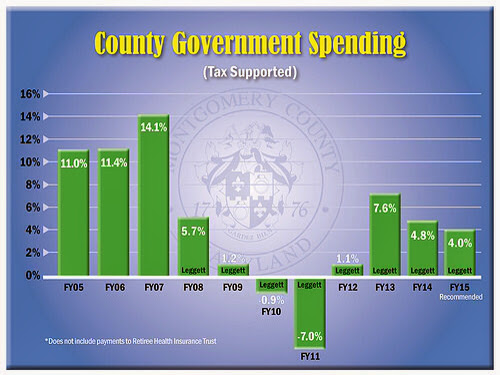 No increase in the Water Quality Protection Charge or solid waste charges for County residents; and

A Washington Suburban Sanitary Commission budget that would increase water and sewer rates by six percent in FY15 in accordance with the Commission’s recently approved budget.

“During my administration, all County taxes, as a share of personal income, have gone down by 10 percent, from an average of 4.41 percent in FY07 to a projected 4.0 percent in FY15,” said Leggett.

Below are budget highlights:

The budget increases County spending for Leggett’s priorities, with education at the top of the list. To meet the challenge of skyrocketing school enrollments, Leggett’s FY15 recommended operating budget includes a record-high of $2.164 billion for the Montgomery County Public Schools (MCPS), an increase of $79.8 million – or 3.8 percent. The unprecedented County contribution is $1.502 billion, $26 million over the Maintenance of Effort requirement of the State of Maryland and 99.3 percent of the Board of Education request – a 3.8 percent increase.

The recommendation for Montgomery College totals $237.3 million, an $8.9 million increase of 3.9 percent. The County contribution is $110.6 million, which is $11 million over Maintenance of Effort and an 11 percent increase over last year. 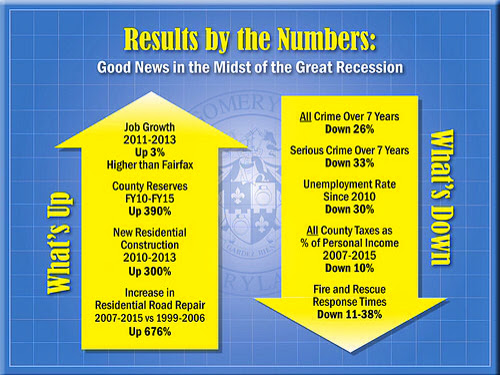 Leggett’s approach to public safety continues to show results, with a nine percent decrease in total crime from 2012 to 2013, part of a seven-year trend that reduced serious crime by 33 percent and all crimes by 26 percent. For the Police Department, Leggett proposed a five percent, $11 million increase that will add 23 sworn officers and two forensic scientists, and double the number of School Resource Officers assigned to County high schools. This expansion is part of Leggett’s multi-year plan to add 120 new officers and 23 Police civilian employees -- for a total of 143. The recommended budget adds a Wheaton patrol unit and a Germantown Central Business District unit.

The Montgomery County Fire & Rescue Service (MCFRS), career and volunteer, continue to make substantial improvements in protecting the lives and property of County residents, significantly reducing, in the last seven years, both ambulance and fire response times in all parts of the County. Civilian fire deaths have fallen from 13 in 2009 to two in 2012 and three in 2013. Because most of those fatalities were older residents, Leggett’s budget strengthens ongoing outreach to seniors who are most at risk for fire deaths. In total, he is recommending $224.3 million for the Fire and Rescue Services, an increase of 3.4 percent.

Leggett has made creating Montgomery County’s jobs of the future one of his top priorities and over the past two years of economic recovery, Montgomery County jobs are up three percent. His FY15 recommended operating budget includes funding to repurpose the William Hanna Innovation Center to become the National Cybersecurity Center of Excellence. It increases Life Sciences and Incubator support by $400,000 and increases by $500,000 County funding for BioHealth Innovation, the public-private partnership to enhance the commercialization of critical research conducted in the County. This budget also increases County support for the successful Local Small Business Reserve Program and for the American Film Institute.

Under Leggett’s administration, Montgomery County was the first local jurisdiction in the nation to establish a Biotech Tax Credit that provides incentives for investment in biotech firms. This year the program provided $500,000 to eligible companies. A new local Cybersecurity Tax Credit is designed to similarly stimulate investments in County-based firms, and Leggett’s budget proposal includes $500,000 for incentives in FY15.

To restore some of the deepest cuts made during the recession, Leggett began rebuilding the Department of Public Libraries budget over the last two years by restoring some hours, materials and staffing. Two renovated libraries in Gaithersburg and Olney were reopened and, this fall, the new Silver Spring Library will open.

From 2007 to 2012, Leggett’s Positive Youth Development Initiative has helped reduce gang-related crimes by almost 50 percent by providing positive after-school opportunities for at-risk youth, intervention to keep young people out of gangs and resources to prevent and stop gang activity. Leggett’s budget proposes adding to the Watkins Mill Cluster an ‘Excel Beyond the Bell’ middle school and a High School Sports Academy. For the successful Linkages to Learning program that addresses the comprehensive needs of at-risk students and their families, the budget adds a site at South Lake Elementary School in the Kennedy Cluster and expands the program to the Watkins Mill Cluster. 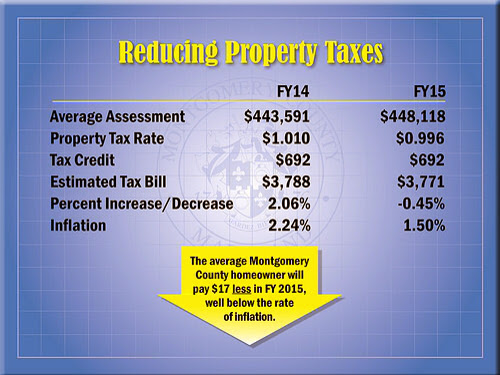 This year’s proposal increases the general fund contribution to the Housing Initiative Fund by 10 percent over last year’s level. Resources were also provided for direct rental assistance to 1,925 households in FY14 and 2,069 in FY15, an increase of 7.5 percent. Funding in this budget continues workshops and individual counseling efforts to reduce foreclosures.

Leggett believes that the level of care for a community’s most vulnerable residents is the best indicator of the quality of that community. Significant additional resources are provided in the FY15 recommended budget for a variety of public health, behavioral health and other critical safety net services. These include replacing federal shortfalls in the community services block and emergency solutions grants; greater funding for the developmental disability supplement and nurse monitoring services for more than 2,000 senior and disabled clients; raising the adult foster care reimbursement rate; adding funds for adult protective services, adult day care, caregiver support, the long-term care ombudsman program, abused persons program and behavioral health programs; and greater funding to increase collaboration to close the academic achievement gap, serve at-risk students and enhance welcome centers.

To meet the challenges of a growing and more diverse population, Leggett believes that a County government partnership with community organizations is vital in leveraging resources and strengthening outreach. In the FY15 budget, Leggett is recommending an increase in community grants of $975,000, for a total of $5.9 million, which includes $1.6 million for Council community grants.

The full budget and highlights are available on the County’s website at: County Executive's Recommended Operating Budget for FY15.

Posted with Blogsy
Posted by Ken at 2:20 PM