On March 29-30, ULI (Urban Land Institute) Washington conducted a technical assistance panel to help to develop concepts for visibly and distinctively identifying the Pike District, the commercial corridor along Rockville Pike between Grosvenor metro station to the south and the Rockville City limits, just south of the Twinbrook Metro station. The sponsor for this study, the White Flint Downtown Advisory Committee, was particularly interested in solidifying a new brand identity for the Pike District, establishing entry points to the area, and communicating major amenities that would attract people as the Pike District evolves.

ULI has released its report. The panel concluded that establishing an area's identity must be organic in order to be authentic and asserted that the identity of the study area will evolve over time. According to the panel, there is no need for a "giant sign" or an arbitrary moniker to create a sense of identity; these elements have a limited lifespan and can feel inauthentic. Instead, the panel encourages the sponsor to recreate the civic realm and view the new primary, secondary, and tertiary streets as foundational assets that can create a sense of identity and place through the intersections they create. 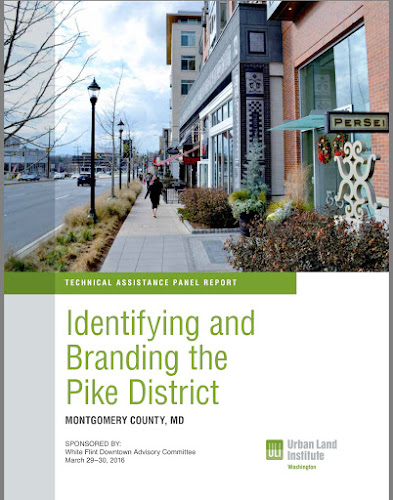 Posted with Blogsy
Posted by Ken at 5:24 AM